“Is this a copperhead?!” Answers to the most common questions people ask me about snakes. Part 1

I have built a little bit of a reputation amongst friends and acquaintances as being the go-to person for snake-related questions. I believe that education is the greatest weapon against fear and I’m deeply saddened by how many snakes I see killed every year for no reason. So, without further ado, here are the questions/misconceptions I get the most often and the answers that may help save a snake’s life someday.

Is it a copperhead?

This is the question I get the most often. Someone will send me a picture of some type of snake and ask me if it’s a copperhead. Out of hundreds of inquiries I’ve had over the years, I’ve only had two that actually turned out to be copperheads. So here are the quickest ways to tell a copperhead from every other non-black snake you find:

Copperheads (and pit vipers in general) have a large hole between the nose and the eye, which is used for sensing heat. This is called a pit. Rattlesnakes and water moccasins have this pit as well. Also, notice that the pupils are cat-like. Here in Virginia (other states have non venomous snakes with catlike eyes) the pupils are a dead giveaway. BUT I know what most of you are thinking: no way in hell am I getting close enough to a snake to look it in the eyes! I feel ya so…

This is the thing that trips most people up. Folks see a snake with ANY pattern and assume it’s a copperhead. A copperhead has a very distinct pattern. They’re generally gray/light brown with darker-colored saddles down the back. Sometimes there are spots between the saddles. They are NOT black and white or black and gray or spotted or speckled or diamond-backed. They have saddles, sometimes broken, but mostly wide at the bottom and narrower down the back. 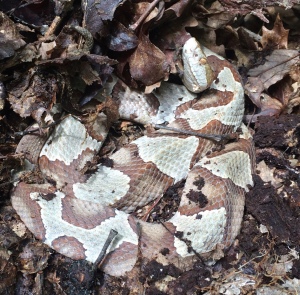 Notice how the saddles narrow and/or split along the spine

Here are a couple more photos (not mine) to show some variation:

Most people point out the heart-shaped or triangular head as an indicator that a snake is venomous. This is not always true; some species of snakes (hognose snakes, water snakes, etc) will flatten out their heads when they’re threatened. The copper head is unique because it’s head is heart-shaped, dun-colored, brown, or brownish gray, and is mostly patternless. There may be subtle spots or slight color variations but the head is by and large unmarked. Corn snakes, milk snakes, juvenile rat snakes, racers, Dekay’s brown snakes and hognose snakes–all often mistaken for copperheads–have distinct markings on their heads. If the head has well-defined markings, it’s not a copperhead.

Notice a few faint spots but the head is generally patternless

This is a rat snake. The juveniles aren’t black; the colors fade when they get older. This one is flaring its head so the shape looks like that of a venomous snake. Notice the clear, distinct markings on the head and the coloration. This is NOT a copperhead!!! Photo credit: https://www.midatlanticwildlifecontrol.com/animal-control-blog/5-most-common-maryland-snakes/

In my experience, people kill water snakes more than any other snakes, thinking they’re copperheads or water moccasins. First point: WE DO NOT HAVE WATER MOCCASINS IN CENTRAL VA. THEY LIVE SOUTH OF THE JAMES RIVER. JUST BECAUSE IT IS IN THE WATER DOES NOT MEAN IT IS A WATER MOCCASIN. Sorry to yell, but if one more person tells me about the water moccasin they saw on Lake Anna, I’m gonna lose it.

Anyway, copperheads do sometimes swim but they look waaayyy different in the water. They’re super buoyant so they tend to float on top of the water and they keep their heads up out of the water like a periscope.

You can see the whole body on top of the water. Photo credit: https://bigdeerblog.com/?p=2963

A water snake has very similar markings but, part or all of the body will be underwater and the head is just above the surface.

Copperheads have a very distinct yellow-tipped tail when they’re little. The theory is that they use it to lure potential prey. A lot of folks think a copperhead will always have a yellow tail but it goes away as they grow so this is only an indicator when they’re very young. This can be helpful because baby copperheads can sometimes have grayish heads instead of the adult rusty-colored head that gives them their name. If you see a bright yellow tail on a small snake, it’s a copperhead. If you see a snake that fits all of the criteria above but doesn’t have a yellow tail, then don’t rule it out just because of that one feature.

Okay, I’m sure it’s a copperhead. What do I do?

Leave it be!!! Whether it’s a copperhead or not, just leave it alone and it will go on its way. Most people get bitten trying to kill or remove venomous snakes. Don’t be a statistic!!! They don’t want anything to do with you and will avoid humans at all costs!!!

But what if it’s in your home or garage? Leave it alone and call an expert. Don’t try to move it or kill it yourself or you’re putting yourself at risk. Plus, copperheads are great at rodent control and aren’t bad to have around the yard.Just because you see one doesn’t mean you have to kill it!!!

The Virginia Herpetological Society is a great resource for all of your snake-related needs. They even have this cool copperhead test on their website where you can try your hand identifying the copperhead amongst similar-looking species. You can click here to see their page about the snakes that are most often mistaken for copperheads. You can also message me on Facebook (Shannon Mills) or Instagram @herpetologyhead with any and all snake-related questions. I’m always happy to help save a snake’s life!